Stories from the city & sea 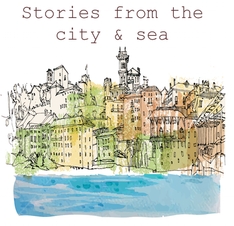 In February 2017, I was looking for a way to become more involved in the Embassy Network, and was encouraged to host an event. With my background in creative writing, I'd been interested in storytelling, but easily thwarted by the cost of attendance and the sometimes competitive nature of existing events. So I decided to put on a similar event and lower the barriers by making it free and encouraging first time storytellers. It would be a way for members of the community to connect in a deeper way.

The first event was held on February 10th, 2017 and I started off the series by telling a story in public for my very first time. I've continued to organize and host the monthly events since then, and occasionally telling my own stories. I hold individual workshops with every storyteller to prepare them, giving me unique access to their inner lives and allowing me to grow as a teacher. It has also enabled me to bring people together, raise awareness of the Embassy Network and its many events and projects, and create new connections.

Themes have included Identity, Transition, and Belonging. All events are free and open to the public. Find us on Facebook  and drop by sometime, and if you're interested in telling a story at an event, fill out this Interest Form. I also offer monthly donation-based group storytelling workshops.
​
Listen to recordings from our events in 2017 and 2018.